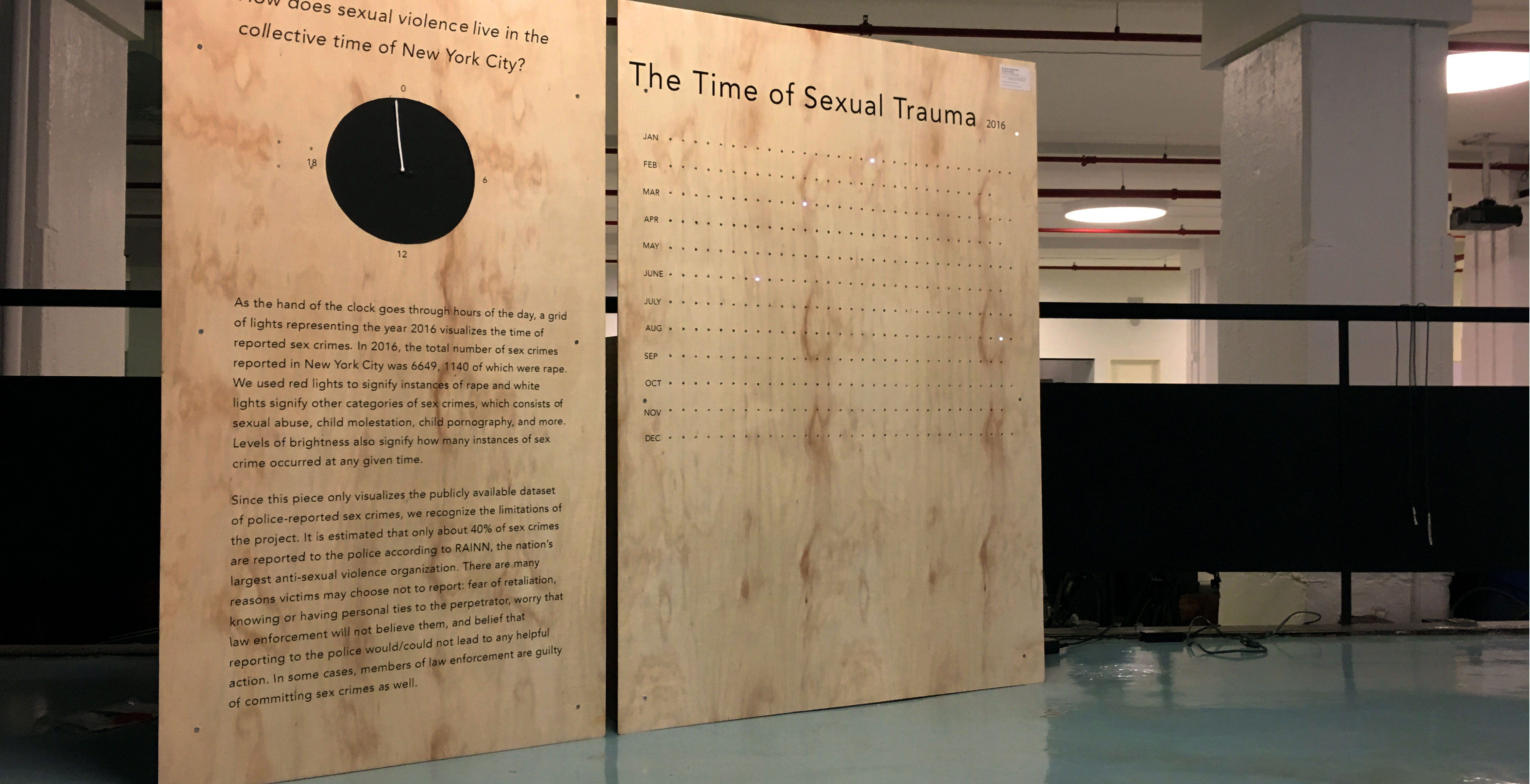 The Time of Sexual Trauma

Data art installation chosen as one of the eight pieces in a data art exhibition called Data Through Design, which was the kick-off event of Open Data Week 2018. In collaboration with Ye Eun Jeong, I visualized the New York City data for all of the reported rape and sex crimes of 2016 using a custom 24 hour clock and 366 LED lights. As the clock went through 24 hours of the day in 24 minutes, the lights (each representing one day of 2016), lit up if there had been rape or sex crimes reported to have happened at that time.

A proposal mockup submitted to the Data Through Design organizers.

After hearing about the open call for submissions for the data art show, Ye Eun and I explored NYC Open Data together, and chose the Rape and Sex crimes dataset. We then put together a proposal to visualize the crimes thinking through the theme of time.

We loaded a python script onto the fadecandy hardware, and using the fadecandy documentation we could easily addressing the individual 366 lights. Ye Eun led the programming process one step at a time. After making sure we could turn on the lights and individually turning them on and off, we loaded in the data. After we were sure that the lights blinked according to the dataset and continually looped, I worked on code to add color to differentiate between rape and all other sex crimes, and brightness to show the number of sex crimes that were reported to have occurred at any given time.

In order to create a custom 24 hour clock, we used and Arduino and stepper motor, attaching it to a thin plastic clock hand. Perhaps one of the most difficult components of the programming was perfectly aligning the time of the clock's rotation to the blinking of the lights.

Click here to see the code to program the lights and custom clock.

With no prior experience in multimedia art, Ye Eun and I dived headfirst into the physical component of installation art. Given our proposal, we knew that we would need 366 LED lights (the year of the dataset was a leap year) that were individually programmable, and a motor that we could use to create a custom 24 hour clock. In addition, all of this had to be attached to a free-standing large wooden board.

After considerable research, we discovered fadecandy which is a hardware piece designed for LED art projects like ours. Then we found LED strips with individually addressable lights would be easier to connect to the fadecandy and any power source than individual lights. So then we purchased the lights, the fadecandy, a power source, capacitors, resistors, and the whole nine yards.

The first construction component to learn was to properly solder together the LED strips first to the fadecandy board and then to each other to properly represent each day of 2016 organized into strips that represent each month. This took a lot of trial and error, as we learned how to create the most stable electrical connections.

Simultaneously, we had to learn some basic woodworking skills in order to create a large free-standing wooden structure that would house the clock, lights and writing. We ended up buying two large wooden boards (3' x 5.5' and 4' x 5.5'). After meticulously creating a grid on the larger wooden piece, I proceeded to drill 366 holes. After attaching the clock motor, and all of the LED strips and their respective wires to the back of the board, we added structural support to make the piece free-standing.

The last component of the piece was to add vinyl text onto the wooden board. We sent text to a vinyl cutter, and diligently attached the vinyl stickers to the wooden board. We wanted to explain the shortcomings of the piece and the data that we were working with, and the importance of our piece within the recent greater movement towards greater accountability for sexual violence.


A Successful Exhibition & Next Steps

Thanks to the hard work of the organizers, the event came together well! On the opening night, many people showed up despite the harsh winter storm. The other pieces also covered interesting multimedia forms, as well as datasets and questions about New York. 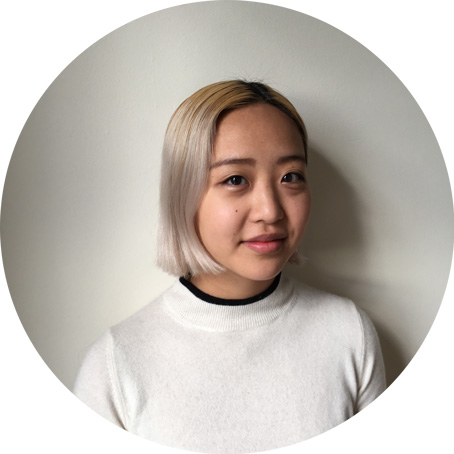